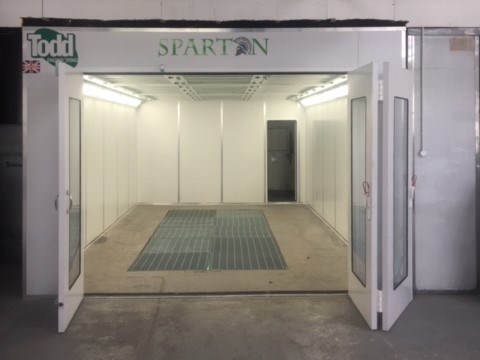 "Boys have done a fantastic job as always," a director at Falles Motor Group said.

The system was installed for Falles Motor Group, an independent family-owned company, which has been trading since 1926. The Falles Accident Repair Centre has one of the largest vehicle accident repair workshops on the island featuring the Todd Engineering Spartan spray booth.

The Spartan Spray Booth installed in Jersey boasts a high airflow rate resulting in 5 air changes per minute, achieved by using a highly efficient fan design and plant work configuration. Combined with energy-efficient technology, including variable speed drives and LED lighting, it ensures that the unit is very economical to run. The airflow design provides a good through-flow of air for removal of paint overspray and vapours without the need for underfloor excavation, floor grids, etc. making installation very swift and straightforward.

The Spartan spray booth is considered a dependable workhorse for any Bodyshop. The Spartan 2000 Series is a premium extract-type spray booth offering high levels of performance at an affordable price. It is ideally suited for applications with a medium to high throughput.

Are you looking to install a vehicle spray booth in the Channel Islands?

If you're looking to install a Spartan spray booth in the Channel Islands, give Todd Engineering a call on 0845 - 017 - 6465. Todd Engineering is the sole UK provider for the Track and Skate system and patented quick-dry systems - tools that allow for rapid turnaround time in respraying vehicles, preferred by insurance companies for speeding up the repair process and reducing costs.

T Todd Engineering Ltd is a family-run business formed in the early nineties that has swiftly expanded to become one of the UK's leading spray booth manufacturers and Bodyshop equipment suppliers. https://www.toddengineering.co.uk/

Falles Motor Group is an independent family-owned company in Jersey, which has been trading since 1926 when the current chairman's grandfather started the business. From modest beginnings repairing motor cars, the company is now involved in all aspects of the motor trade. Falles Accident Repair Centre is one of the largest vehicle accident repair workshops on the island.

Get in touch with your enquiries today